I WOULDN'T WANT TO PUT MY OWN CHILDREN AT RISK.

It is therefore very hard to guarantee that no nuts have ended up touching the finished product.

We know that even the smallest trace of nut contamination can have a detrimental effect, so whilst we can never make a 100% guarantee (although we try 100% of the time), we have taken every possible step to make sure they are the safest on the market and safer than making it at home. 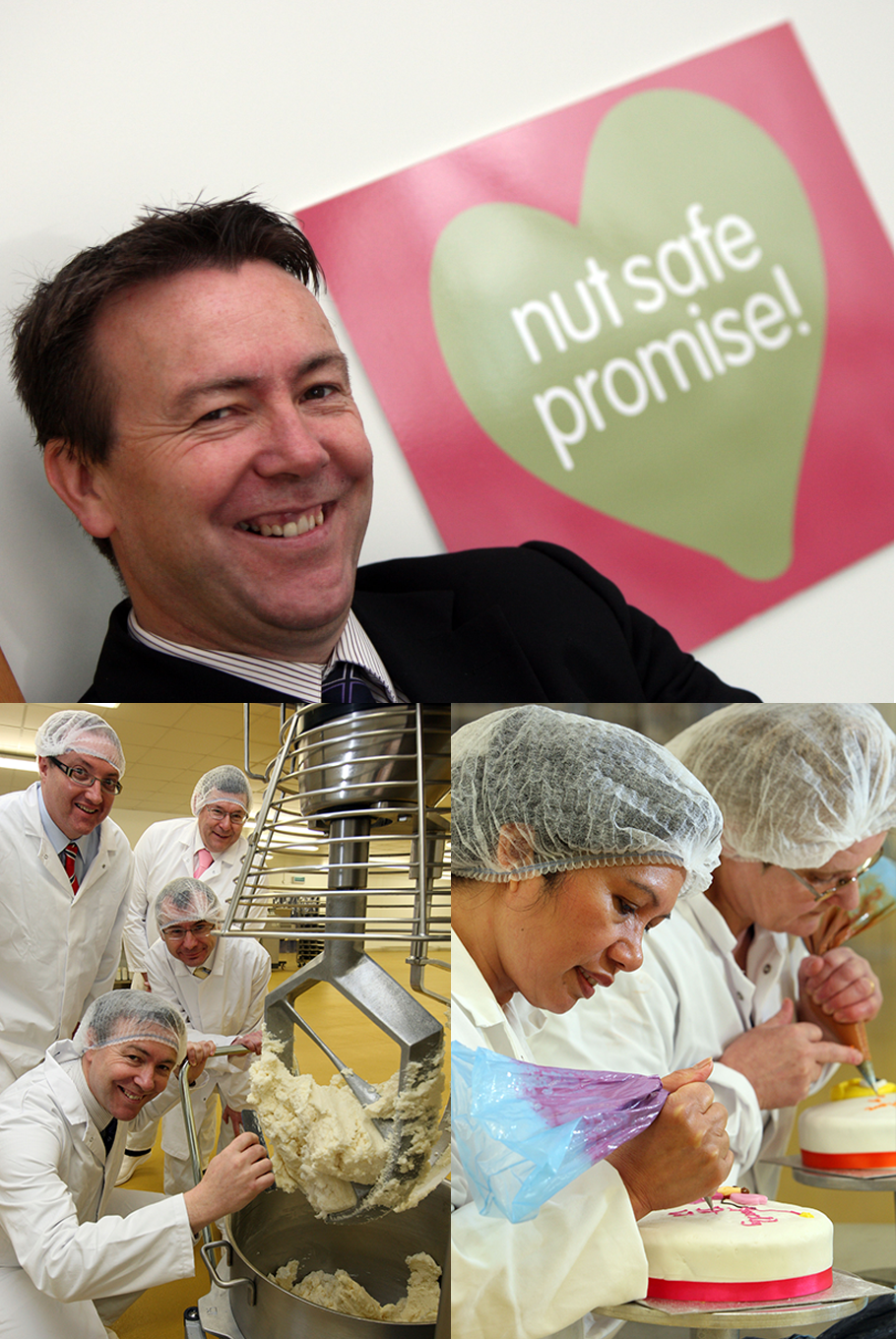 100% no nuts used in the recipes
The Just Love Food Company will never make any products that use nuts as an ingredient.

100% no nuts on site
The product is manufactured in a factory that will NEVER handle nuts. It's not just the recipe that has no nuts, our staff, our visitors and our suppliers will not be permitted to bring nuts on site.

Every step risk assessed
We have risk assessed every step of the supply chain, from our suppliers to their delivery vehicle, from our goods inwards to our dispatch, from our delivery vehicles to the supermarket shelves. Each step has been reviewed and has now got a management action required to maintain the nut safe product. Our Technical team is constantly reviewing this to make sure it is secure.

Recognised standards used
The Anaphylaxis Campaign Standard was used as our platform for allergy risk assessment at launch.

Testing happens frequently
We have an agreed testing procedure so we can frequently check both the raw materials coming into us and the final product going out. 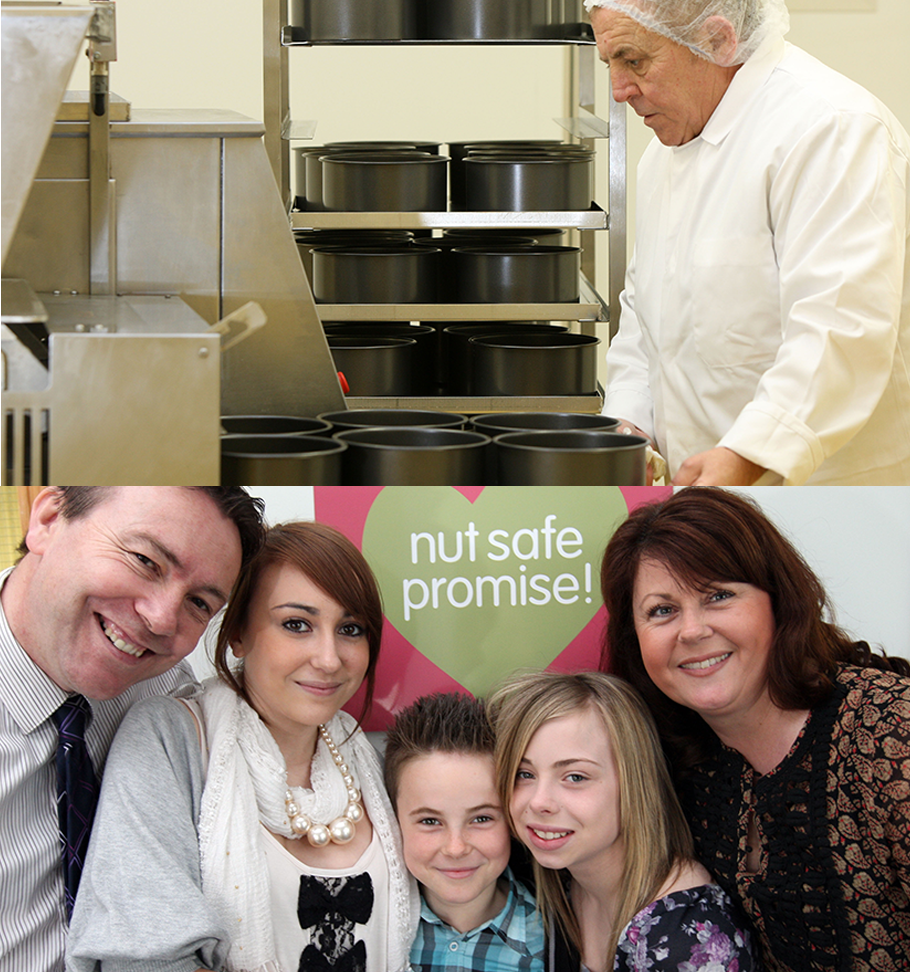 Our mission is to help research into solving food allergies.

It’s important for us to create work place environments where teams can develop and experience great growth.

We are convinced we can make a difference in the life of the allergy sufferer, and what better way than by making great food.

Passion
About people, products and processes.

Integrity
We are always true to our company’s core beliefs.

Team work
Our teams are built up around being able to complete the whole task.

Making a difference
To people within the business and the community, particularly those affected by nut allergies.

Karen Woods. Wife of Mike and mother to Jamilla, Danika and Rourke shares her experiences of dealing with nut allergies.

Danika was nearly four when she was diagnosed with a severe nut allergy. She had been suffering with eczema for a couple of years and had been taken into hospital one weekend after her skin had become infected.

Breaking the news to our family, who all live in Leicester, was particularly upsetting as nobody could really do anything to help and everybody questioned how they could keep them safe – it felt an impossible task. The nursery where Rourke attended was very good and they all had epipen training. The only difficulty came when there was a birthday and someone would bring in a cake or sweets and Rourke wasn't allowed to eat them, as we were advised to avoid all 'may contain nuts' products.

I had to accompany him on all trips and talk to him from a very early age about not sharing food. It was harder for Danika as some of the things she had been allowed to eat were suddenly off limits. We were told to tell them that they were 'special' not different, as it is hard for them if they think they stand out from others.

Our school became a nut free school as there were a couple of other children that needed epipens. I remember a mother being very annoyed because her daughter liked peanut butter sandwiches. She thought Danika should be sent home for lunch or sit on her own!

Life with allergies is harder for different reasons, the food shopping can be tiring as I have to read all labels, even food I regularly buy can change production methods which in turn can alter the allergy advice. Even cosmetics have to be monitored as some toiletries contain almonds. When eating out, we either phone beforehand, talk to the chef, or both.

Holidays are now self-catering; we take our own food and prefer to eat in. We have travelled to France and Italy and use translation cards but would avoid hotels. When the children go to friends houses, we have to make sure they have their epipens, that the hosts are comfortable with them and how to use them. This can be off putting for some and although it's getting easier, I used to stay home just in case I was needed quickly. At parties, I would always stay and we would take our own food. They are never allowed the cake and all the party bags have to be checked. As they got older and wanted a little more independence, I would sit and wait in the car for the party to finish! I now feel confident to leave them as all our friends are familiar with the condition, they are, of course, very careful and phone me if they are not sure about something.

My worry as a mother never goes, it changes, but never goes.

Danika is now 13, in high school and has to carry her own epipens. I have shown her best friend how to recognise a reaction and how to use an epipen. She went to France with the school this year, which was extremely traumatic for me! Staff were trained, kitchens inspected, the chef was prepared and mobile numbers exchanged. She had a fantastic time, but was on my mind constantly.

The death rate is higher in teenagers because it's not 'cool' to carry their epipens and many are caught out without them.

It's easier for girls, as they carry bags everywhere but not so easy for boys. My worry for them now growing up and going out in the evenings is that they will become too relaxed and forget their epipens. I worry that after drinking they will become less vigilant of their surroundings and worry if they kiss someone who's been eating nuts it could also trigger an attack….the list goes on. Handing over the responsibility of the epipens to them is vital, but difficult, because you are losing control and it's the control that makes you feel safe. Danika is very good but Rourke, now 10, has left his at various places, but he is learning.

Jamilla, our oldest, now 14 was five when it all happened and to some extent felt a little left out as all the focus was on the other two children. There have been times of resentment also, when we have been unable to eat nice treats or go to restaurants, which again emotionally can be different.

Our first nut free Christmas felt very strange. No cake, no Christmas pudding, no minces pies, no shelled nuts and on a personal note, no chocolate covered brazils in my stocking! While our life has adapted to becoming a nut free family, everything we do still needs more planning and thinking about. I'm sure there will be challenges for us in the future, but the experiences we have had as a family to date has meant that we are closer than we could ever be.

If you, or a family member, are in a similar position, we'd love to hear from you.

Many people are not familiar with the prevalence of nut allergies, here you’ll find some top line facts and statistics.

The most common signs that a child who has been exposed to an allergen might have anaphylaxis are: